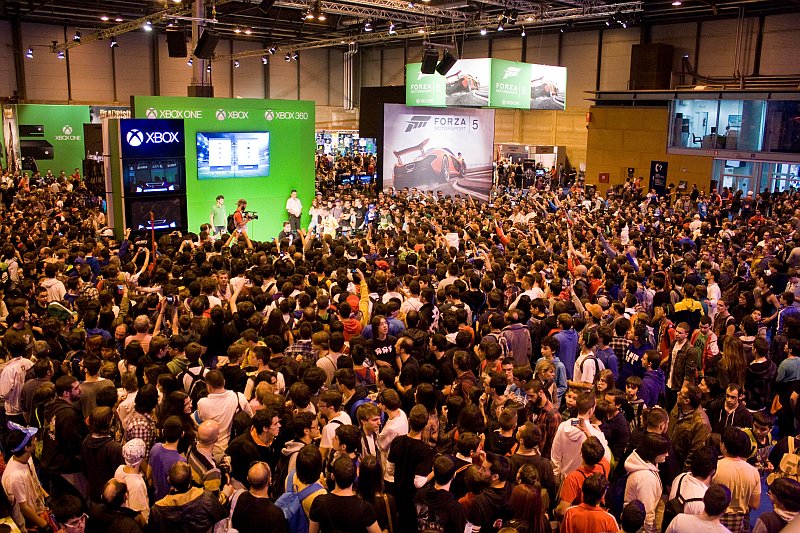 So we visited the fair! Madrid Games Week was amazing. Oculus Rift, Play Station 4, XBOX One… Plus many old consoles from this generation and beyond. They even had a Master Sword ready to be taken. And many more things. Retrogaming (playing the original Super Smash Bros was really nice), sports cars, ladies standing near sports cars, a fucking plane, Japanese games that never came to Europe, hama stuff, cosplayers, Pokémons… It was truly great. In addition, we also met amazing people.

Yeah! We, The Goat’s crew, are able to socialize.

In our last post we talked about two games: Candle and Gods will be watching. Finally, we met the studios behind these amazing graphic adventures: Teku Studios and Deconstruct Team. We really get along. In fact, we got a photograph surrounding two of the members of Teku Studios. We assure you that they were not forced to appear in the picture. Anyway, both games are high quality masterpieces, so we encourage you to keep your eyes on them.

We also met Evil Mind Entertainment. Well, some of Risin’ Goat already knew people from that company, but it was good to see them again and also playing their new game: Extinction. A zombie apocalypse that fits in your pocket. A mobile game (Android and iOS) in which you control two tough guys against a horde of zombies. And it’s free! So go burn your mobile device right now (unless you are a Windows Phone user).

More projects, more projects. Kraken Empire was showing its 3d six degrees shooter Kromaia. Isn’t it a nice name? It is catchy. In addition to a cool name, Kromaia features a mechanical-like fantasy world that adapts to the way you play. Pretty impressive. We really would like to play it using Oculus Rift. They are currently funding the game through Indie Gogo, so if you have some bucks left, it could be a good investment for you. They are also trying to get into Steam through Greenlight.

And many more, like Nihilumbra, Crazy Belts and Sugar Kid. We will use future posts to talk about them.

This is it for now. We promise that we will talk about us and our project in the next post… Again. Don’t you worry, we will have to do it sooner or later. Stay tuned!